One of our three fundamental needs as human beings is shelter, and long have we spent perfecting and simplifying our mastery of this necessity.

Log cabin dwellings began with a very simple purpose; to provide shelter from the elements.

Over the years, with many realizing how exquisite, efficient and economic log cabins are, they have gained immensely in popularity and have become more luxurious with a wide range of purposes.

Check out these eight weird and wonderful log cabin facts, from where they originated from, to who lived in them, to the biggest log home in the world!

Prepare to be inspired to start your own adventure in planning your own weird and wonderful log cabin!

Log cabins are a symbol of humble origins and have come to represent hard work and patriotism in America.

Seven US presidents were either born in or have lived in a log cabin including Abraham Lincoln, Andrew Jackson, James Buchanan and Adlai Stevenson.

The log cabin became a political icon when it was used to drive a presidential campaign for William Henry Harrison, intending to show America he was a man of the people.

Other famous people who have owned log cabins include Ralph Lauren and the late Muhammad Ali.

Ralph Lauren owns a stunning log home in Montauk, Colorado which sits on between 15,000 and 16,000 acres! The huge RRL ranch, named after him and his wife, is home to a collection of houses, forests, valleys and lakes.

Muhammad Ali built a log cabin training camp in Deer Lake, Pennsylvania. He began by chopping one tree a day down and eventually had eighteen log cabins for him and his guests!

Built in-between 1638 and 1643 is what’s thought to be the oldest log cabin in North America. Nothnagle Cabin was put on the National Register of Historic Places in 1976.

The Rinks who care for the cabin, whilst living in a newer section added in the early 1900s, make it their priority to maintain and repair it as close to the original design as possible.

Recently they have used clay from the Salem County Farm to repair the cracks in the wood. 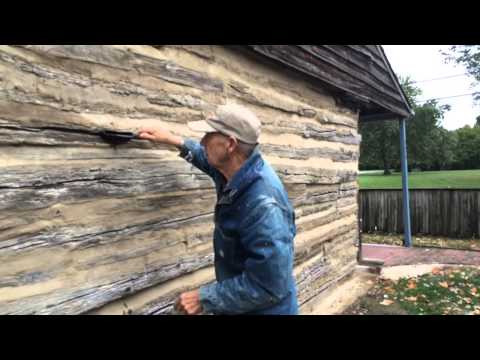 Harry and Doris Rink enjoy showing people around the cabin and passing the history of the cabin onto others.

All of your history books in school begin with the Revolutionary War. This is the 17th century. It’s before the history books. When people come here they walk away with more.

They have even given a tour to visitors who made a detour to see the historic structure at 2am!
All the logs are the original logs except for one which was damaged by ivy and had to be replaced.
Although originally thought to be built by Swedish immigrants, the construction suggests it is of Finnish construction. The tell-tale signs include dovetail joints and an indoor chimney.

This is a much debated topic and the origin of log cabins is uncertain.

It is thought that the first log cabins were built over 5000 years ago during the Bronze Age in Northern Europe.

Men of old were born like the wild beasts” they began constructing dwellings by laying logs on top of each other and filling the gaps with “chips and mud.

C. A. Weslager describes the evolutionary process which Europeans went through in building their log homes:

From the crude “pirtti”…a small gabled-roof cabin of round logs with an opening in the roof to vent smoke, to more sophisticated squared logs with interlocking double-notch joints, the timber extending beyond the corners.

In medieval times, log cabins were considered to be movable property, as illustrated by the relocation of an entire village, the village of Espaby in 1557. It is thought that log cabins were first brought to America in the 1630’s by the Scandinavians, to an area which later became known as Delaware. Others believe that the Mennonites brought them to the Pennsylvanian area in the early 18th century.

Granot Loma is reported to be the largest log cabin in the world and comes with a price tag of 40 million dollars!

Set on almost eight MILES of land, the 26,000 square foot log home mansion took four years to construct and was designed by 22 architects.

The name of the estate – Granot Loma, is a combination of letters from the original owner, Kaufman’s, three children’s names; Louis, Graveraet and Otto, and his wife Marie.

The home, which sits on the shoreline of Lake Superior, has 23 bedrooms, 13 bathrooms and is exquisitely.

The 60 foot great room has a chandelier made from a white pine tree that Kaufman played under as a child which is now adorned with carvings of over 50 animals and people.

It also has a 30 foot long fireplace, the stones personally chosen by Marie Kaufman by instructing divers on which ones to select and the mantel is made from a salvaged sunken ship in Lake Superior.

The property also has many other buildings, to name a few; four apartments, a tennis court designed by tennis champion Bill Tilde, a farm, an orchard, a pool and pool house.

Their cabin is not anything grand or fancy, instead it was built based on the design of a Norwegian storehouse, known as a stabbur, with wide eaves to repel rain and snow, small windows to reduce heat loss and a loft area which almost doubles the floor space.

By keeping the size of the cabin small, the couple managed to fell their own trees and strip them, using simple hand tools and hauled the logs out of the woods using an old set of iron wheels and ropes!

Building a log cabin doesn’t have to be an expensive venture. The couple take delight in the fact that their cabin was built using only a month’s savings, and it has given them a great sense of satisfaction building their cabin by hand with only simple hand tools.

The couple love living the ‘back-to-nature’ lifestyle and encourage others that it is possible to build your own log cabin without spending fortunes.

The classic children’s construction toy Lincoln Logs was developed in 1916 by John Lloyd Wright, son of Frank Lloyd Wright, a famous American architect and has won lots of prestigious awards.

Lincoln Logs are miniature notched logs which can be built by children into a log cabin. They were originally made from wood but now incorporate plastic too. The toy encourages children’s creativity and imagination and helps develop problem solving and fine motor skills.

This year marks the 100th anniversary of Lincoln Logs!

Many people we speak to recall playing with Lincoln Logs when they were younger and have now built and live in their very own real life size log cabin!

The list is never ending for the amount of things log cabins have inspired and used to brand a product.

Log Cabin Syrup, named after the American icon, President Abraham Lincoln, Patrick J. Towle, a grocer from Minnesota, has been making log cabin syrup for over one hundred years.

Patrick introduced Log Cabin Syrup in 1887 and chose the brand name ‘Log Cabin Syrup’ to honour the president who grew up in a Log cabin in Kentucky.

The syrup is very popular throughout the US and has become a tradition for many families at the breakfast table!

Log homes are much more energy efficient than conventional homes. Builder Mike Gringas, the owner of Seven North Log Homes in Vermont says “Today we can build a log and timber home to be 15 to 20 percent more energy efficient than a conventional home,” provided the joints between the foundation and the logs, and the logs and the roof have been built well and are appropriately caulked.

This is mainly because a lot of builders build log homes to meet the DOE’s ‘Energy star’ standards meaning the building is 30% more energy efficient than building codes state the need for.

Additionally to this they are much more environmentally friendly than conventional homes given that log homes are constructed mainly from natural and renewable materials, and when the home is being deconstructed in the future, its parts can be reused rather than sit in land fill.

So there you have it, from the absolute cheapest to some of the most expensive and from trinkets to condiments, it turns out there is much more to log cabins than meets the eye.

Seemingly, log cabins have become an iconic symbol, an efficient lifestyle, an escape route back to nature and also, a rustic environment in which to while away your days.

Now you have another eight awesome things to add to your list of reasons to build your very own log cabin! Do you have any quirky facts or interesting pieces of information about log cabins?

We would LOVE to hear them, let us know below!

Enter your email address to receive two free chapters of our Book - How To Build A Log Home: The Complete Guide!

Get Your Guide Now